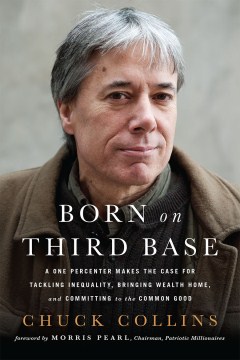 Born on Third Base

A One Percenter Makes the Case for Tackling Inequality, Bringing Wealth Home, and Committing to the Common Good

As heard on NPR's Fresh Air

"This empowering light into a brighter future is a narrative you won’t want to miss." – Ralph Nader

"Collins not only talks the talk but walks the walk...this is a worthwhile book to read, digest, and share" – Publishers Weekly

The growing wealth inequality continues to dominate headlines. The divide between the haves and have nots in America is increasingly political and tensions are rising. On one side, the wealthy wield power and advantage, keeping the system operating in their favor?all while retreating into enclaves that separate them further and further from the poor and working class. On the other side, those who find it increasingly difficult to keep up or get ahead are desperate and frustrated ?waging a rhetorical war against the rich and letting anger and resentment keep us from seeing new potential solutions.

But can we suspend both class wars long enough to consider a new way forward? Is it really good for anyone that most of society’s wealth is pooling at the very top of the wealth ladder? Does anyone, including the one percent, really want to live in a society plagued by economic

It is time to think differently, says longtime inequality expert and activist Chuck Collins. Born into the one percent, Collins gave away his inheritance at 26 and spent the next three decades mobilizing against inequality. He uses his perspective from both sides of the divide to deliver a

Collins calls for a ceasefire and invites the wealthy to come back home, investing themselves and their wealth in struggling communities. And he asks the non-wealthy to build alliances with the one percent and others at the top of the wealth ladder.

Stories told along the way explore the roots of advantage, show how taxpayers subsidize the wealthy, and reveal how charity, used incorrectly, can actually reinforce extreme inequality. Readers meet pioneers who are crossing the divide to work together in new ways, including residents in the author’s own Boston-area neighborhood who have launched some of the most interesting community transition efforts in the nation.

In the end, Collins’s national and local solutions not only challenge inequality but also respond to climate change and offer an unexpected, fresh take on one of our most intransigent problems.

For some reason I didn't finish the book but I did like it. Maybe too many check out. Anyone remember the name of the group he has ..of rich people who work together to help in lots of ways?

There are no summaries for this title yet.

There are no quotes for this title yet.