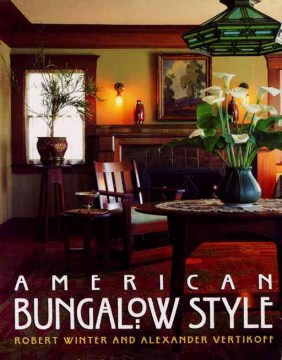 Simon and Schuster
America once had a love affair with bungalows -- and it's being rekindled coast to coast. This elegant book showcases exceptional examples and features a catalogue of period furnishings.

With a flaming fire in the cozy hearth, a comfortable Morris chair, and soft, natural colors everywhere, bungalows have long embodied the ideal of the American home. At the turn of the century they took the country by storm, providing well-designed and well-priced shelter nationwide. Bungalows revolutionized residential architecture in America and grew into a beloved symbol of domesticity by offering stylish yet affordable housing for the average person. Today whole neighborhoods of bungalows are being saved and restored by people who appreciate the simple and natural lifestyle made possible by these small houses.

Beautifully illustrated with more than three hundred color photographs, American Bungalow Style presents two dozen American houses that capture the bungalow spirit. Many are Arts and Crafts in style, others show a touch of Spain or colonial America, and all exemplify the charms that enticed thousands of bungalow buyers during the form's heyday from 1880 to 1930. Among the bungalows included are examples by famous architects from Frank Lloyd Wright to Bernard Maybeck, as well as Gustav Stickley's own log cabin retreat. Many are the work of anonymous but skilled builders, and some were ordered by mail.

Bungalows may differ widely in style and size, but they have in common a simplified plan that places most of the living spaces on one floor. They are typically one or one and a half stories high, low in profile, and fitted with lots of built-ins and all the conveniences of their time. On their own piece of land, with a garden in front or back and space to park a car, bungalows provided the privacy and independence that many Americans favor.

The idea that simplicity and artistry could harmonize in one affordable house spurred the bungalow's popularity -- a rare movement in which good architecture was found outside the world of the wealthy. Bungalows allowed people of modest means to achieve something they had long sought: respectability. With its special features the bungalow filled more than the need for shelter. It provided fulfillment of the American dream.

A fully illustrated appendix features more than one hundred furnishings suitable for bungalows and Arts and Crafts houses. This special catalogue section highlights modern reproductions of tables and chairs, lamps, textiles, wall coverings, tile, and hardware that look right at home in bungalows old and new, commodious and compact.

There are no comments for this title yet.

There are no summaries for this title yet.

There are no quotes for this title yet.